When I was about this age (kindergarten), I realized that s-e-e, if sounded out, was the 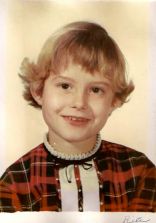 word we called see. It was one of the most thrilling moments of my life. Why? Because it entailed putting language together to find meaning. It also involved, in a way, finding vision.

Many years later, I’m still thrilled to be doing all those things.

I’ve taught college English and edited as well as written and lived happily all around the country. I currently live in bucolic central New Jersey, grew up in Oregon, and enjoyed stints in both the San

Francisco Bay area and New York City. I went to school in Pennsylvania, Delaware, and California. I’ve been around, and love regional America. (To the left: an older me, near Anacortes, Washington.) I’m also a Civil War buff and love music and dance.